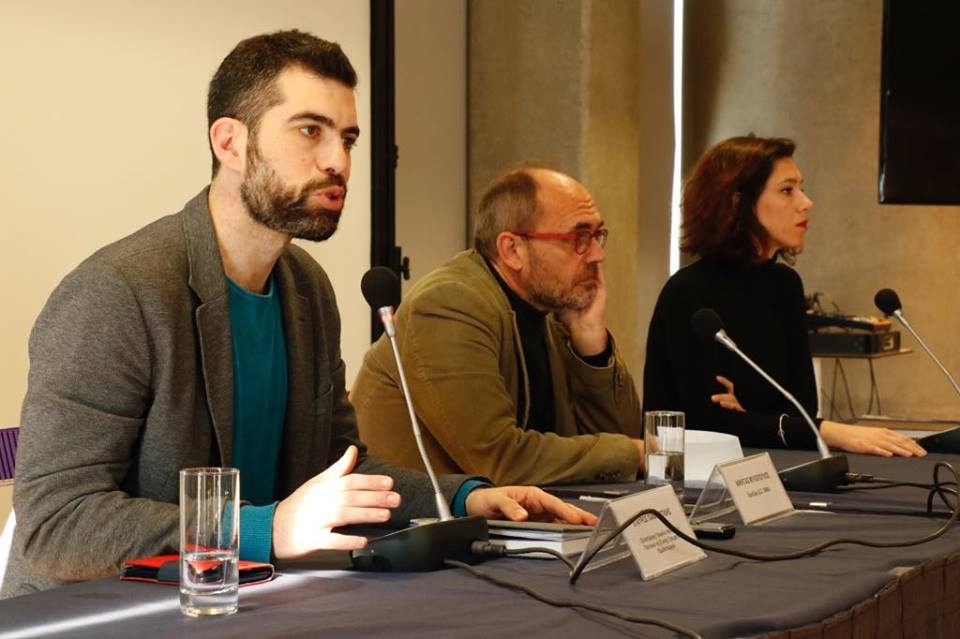 For the 2nd year, the largest “cultural party” of the European south is coming  to Thessaloniki!

The 2nd #SKG Bridges Festival is a reality… After its successful organization last year, the biggest European Youth Culture Festival has become an institution. For five days, from 8th to 12th May, the “heart” of culture and arts will … strike in Thessaloniki.Music, dance, cinema, theater, photography, performance, visual arts through the eyes of new creators and artistic groups from the European South will “flood” the city and transform the urban fabric into a huge, open cultural “park”!The event is at the initiative of the Office of Social Policies of the Prime Minister’s General Secretariat and is implemented in cooperation with the General Secretariat for Youth, the Ministry of Culture and Sports, and the Ministry of Tourism.

The organizers, who aspire at an even richest Festival this year, have given a press conference at the Thessaloniki Concert Hall. During the presentation of this year’s 2nd #SKG Bridges Uprising Art & Culture Festival, were present Mr. Stavros Panagiotidis, Head of the Social Policies Office of the Prime Minister’s General Secretariat, under the auspices of which the Festival is organized, Ms. Matoula Koutsari, Festival Coordinator, and Mr. Nikitas Mylopoulos, chairman of the board of trustees of the Organization of Thessaloniki Concert Hall. The Minister of Culture and Sports, Ms. Myrsini Zorba also spoke via Skype.

N. Mylopoulos: “The Festival falls under the visual framework of the Thessaloniki Concert Hall”

The press conference was opened by the chairman of the board of the trustees Thessaloniki Concert Hall, Mr. Nikitas Mylopoulos, who said that the festival’s goals – such as extroversion, the role of citizens in cultural creation, the emphasis on young people and the interventionist role of cultural operators are totally coordinated with the aims of the Thessaloniki Concert Hall. “The SKG Bridges Festival, for the second consecutive year, is now a very important institution for the city of Thessaloniki. It falls within the vision of the Thessaloniki Concert Hall for as much cultural and artistic extroversion as possible. Our aim is to involve citizens” he said. He also gave the “news” of the press conference that the Concert Hall from now on undertakes the role of the central management of the Festival, especially the economic, which is expected to simplify the procedures as all the actors and artistic groups will have only a single benchmark for these issues.

M. Zorba: “It is an “explosion” of youth and arts”

Then Ms. Myrsini Zorba, Minister of Culture and Sports, interceded via Skype, highlighting that SKG Bridges Festival, “is an explosion of youth and arts. The European South, the Balkans, give a new message … Arts will perceive the future through the youthful look”. Ms. Myrsini Zorba also stressed the need for greater transparency and meritocracy in the arts and culture sector emphasizing three of the most distinctive features of the Festival: the cooperation of entities and arts, the initiatives with neighboring countries in Southeastern Europe, as well as the access of all citizens to the events, as they are free of charge and generally make use of the public spaces of the city.The Minister of Culture and Sports also mentioned that the Festival “is a prime example of cultural democracy that shows the way to full democracy”.

S. Panagiotidis: “Thessaloniki is at the center of the artistic south”

The Head of the Social Policies Office of the Prime Minister’s, General Secretariat  Mr. Stavros  Panagiotidis, mentioned the original idea of ​​the organization:”The central idea of ​​the Festival is to give young artists the opportunity to present their work, to have as many opportunities as possible, to have as much space as possible literally and metaphorically. We thought of “Bridges” as a bridging event, in which all the arts, all forms, all the streams and all types, the most classical, youthful and radical, come in. It is a festival, which is formed jointly by the official artistic bodies of the city and the young artistic groups “. Mr. S. Panagiotidis also referred to the role of Thessaloniki: “Thessaloniki is at the center of the artistic south. It is a festival that opens up new prospects, and contributes to the development of Northern Greece. It also helps in making  Thessaloniki a Metropolis of the Balkans”.

The Head of the Social Policies Office of the Prime Minister’s General Secretariat  also spoke for the need to give space and support to new creators who have not yet managed to live by their art. At the same time he noticed that this year the applications and proposals for the Festival exceeded 200. Of course he did mentioned the variety of the Festival, with proposals from various artistic genres and currents.Stavros Panagiotides, during his speech, revealed his vision for the SKG Bridges Festival: “This Festival is an idea that can strengthen and lay the foundation for the identity of Thessaloniki. The city is its people and if someone can change the city’s character, then only these people are the suitable ones” he said.

M. Koutsari: “ The range of contemporary artistic production at the 2nd SKG Bridges “

Ms. Matoula Koutsari, the coordinator of the Festival, referred to the significant appeal of the new independent artists, musicians, actors, dancers and curators from Greece and the countries of the European South, with about 200 proposals submitted, stressing that the successful artists will cover almost with their actions 50% of this year’s program, which will include big and small artistic events over a 5-day period.Regarding hospitality spaces, Ms. Matoula Koutsari spoke of their peculiarity: “Hospitality spaces vary in their character and their history. The actions will take place in museums of the city such as the Byzantine, the Archaeological, the Telloglio, in  MOMUS places but also in unexpected places of the city such as the Railway Station, public services, squares and streets covering most of the urban web .The cooperation between the Bridges Festival and the Service of antiquities and newer monuments of the city, which will allow the use of archaeological sites, is particularly important. “Regarding the Festival program, the coordinator of the event stressed: “The 2nd Bridges program includes the whole range of contemporary artistic production, paying special attention to visual arts with all their derivatives.”

Citizens’ access to all events is free of charge!